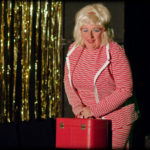 Penny Lowther, inspired by the Older Women’s Circus in Melbourne, dreamt of establishing a Women’s Circus for Wollongong. In November 2000, Penny posted flyers advertising a meeting for interested women at Austinmer’s Fireworks café. The group of women who met had varied interests, skills and experience but no-one had ever been in a circus before.

The timing was right. Bathurst’s Circus Monoxide had recently been invited to take up a circus residency with Wollongong City Council. Circus WOW had its first performance booked based on the excitement of women doing circus before WOW had organised any circus training.

In the early days WOW relied on Circus Monoxide to provide trainers, support, equipment and training space at the old Bellambi Works Depot that over time became a thriving Circus hub. 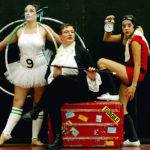 WOW’s first gig was called Flame, a fire show that was the finale of Wollongong’s Community Arts Festival, Viva La Gong. WOW also featured in Wollongong’s International Women’s Day pool party at the Continental Baths in March 2001. Pink-capped bathing beauties in all shapes and sizes did aquatic themed acrobalance beside the pool to an enthusiastic audience. The stunning coastline provided an atmospheric backdrop to the circus acts.

Penny and Soraya del Castillo, as ‘Pam and Dee’ in lycra and feather boas, introduced us to various acts including the human sculpture ‘Landforms’, the surf lifesaving ironwomen with ironing boards underarm in ‘Scrubbers’ and the clowning multi-tasking ‘Stilt Mummas’ at WOW’s first big show at the Illawarra Performing Arts Centre (IPAC) in 2002, ‘What’s Her Story?’

Circus WOW came of age in what has become a thriving Illawarra circus community. Circus WOW participants have gone on to become professional performers, circus trainers, riggers and costume designers as well as establishing the Wollongong’s children’s circus, Half High.

WOW’s emphasis on women’s issues has increased the profile of women performers, particularly older and diverse groups of women. The families and friends who watched their mothers, grandmothers, sisters, daughters and aunts performing in costume, on stilts or trapeze saw the stereotypes of women fall away. Circus WOW performers provided great role models for what women are able to achieve. Many audience members were inspired to join the circus themselves.

Circus WOW has contributed an important role in the development of a vibrant, inclusive circus community in the Illawarra.  WOW celebrated 10 years of women’s circus in the Illawarra in March 2012 in a vibrant show.